skip to main | skip to sidebar

Dell on Camp via Digital Camera 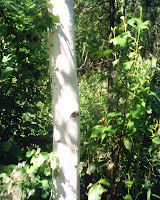 The digital camera makes taking and sharing camp and nature pictures a cinch.

I took this photograph in late afternoon light and am able to share it with friends within minutes of my return to camp by simply connecting a cord from the camera to my computer. That's it: no CD to load, the computer recognizes what I'm up to and asks me which viewing application I want to use and voila! up come my photographs to copy, crop, adjust, save, delete or retain, just as I please.

Are you able to feel the warmth of the 78 degree afternoon? upon this lovely white birch? can you hear the sound of the birds calling among the treetops, the soft slap of waves lapping the water's edge under the fallen maple? the duck startled into flight rising over the sun-drenched water, the rustle of the leaves overhead?

I still think in fahrenheit although it has been over thirty years since Canada went metric: that's a warm 26 Celsius today in northern Ontario, with thundershowers expected tomorrow. While forest fire risk is currently rated low to moderate, the dry spell that has lowered area water levels is cause for real vigilance concerning fire: man-made fire for cooking and heat or nature's fire: lightening strikes. 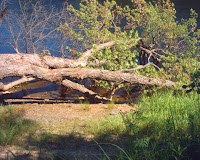 Speaking of fires, this maple that fell after one of this spring's heavy wind storms is slated to become part of my wood pile. Some downed trees become homes and nests for wildlife, including raccoons and wood ducks. I noticed the brown-eyed susans are on the verge of blooming. They're one of my grand-daughter's favourite flowers; I'm hoping to take a frame-worthy photograph. With my digital camera, I always know if I have the shot I want.

For those of us who remember the Brownie camera, I recommend Digital Photography For Seniors For Dummies

I've had my one perfect cup of coffee this morning and am totally refreshed after a weekend of Father's Day activities. As a grandfather who has parented both his daughter and grand-daughter, I can honeslty say I have been two very different fathers. The first time around I was on auto-pilot; whereas with the arrival of fourteen year-old, Shelley, I got a chance to understand what had gone wrong the first time around and how I could acquire healthy parenting skills. But first I had to own the size of my parenting problem and some behaviours I had acquired without even noticing the destructive effect they had on those I loved.

Paul Meier co-authored one of Shelley's favourite self-help books, Love is a Choice. His latest co-authored book is You Might Be a Narcissist If... - How to Identify Narcissism in Ourselves and Others and What We Can Do About It

. This is my bedside book for frequent review, because those behaviours, even a small number of them, are unhealthy in ourselves and those with whom we interact. Narcissistic traits were learned as a child but I could only address these traits when I recognized them for what they were. Too often, someone will recognize a certain pattern in an abusive spouse, but fail to see their employer or best friend has similar traits, if not to the same degree. The pattern may be narcissism under various guises. Personally, the worst of narcissism was realizing I failed to see it in myself: comfortably numb [not in the Led Zeppelin way, either!]

Another timely book, is last year's The Entitlement-Free Child: Raising Confident and Responsible Kids in a "Me, Mine, Now!" Culture

by Karen Deerwester. As the saying goes, Any man can be a father... raising a child requires thought and actions geared to preparing that child for the challenges of the future.

Grandparents have a special role to play in today's busy world: raising or assisting in the raising of grandchildren. Understanding changing social structures and their impact on those we love provides the groundwork to being a better parent. Whether you are a first time parent or grand parent, or simply interested in self-improvement, these books are worthwhile additions to any library.

Summer has officially arrived. Shelley's friend, Kevin, has stayed on at camp here for another day and the two of us are heading outside to catch some rays.

The little guy is me