skip to main | skip to sidebar

I don't know how things are where you are, but it's raining cats and dogs here: sure to help keep the fire risk low.

I'm looking for feedback on the situation outlined below : 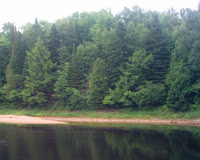 A foreigner buys a lakefront property in Canada: everyone in the area has always traipsed through the hilly forest to get to the lake at the top. It's a deep cold lake, fed by a series of ground springs and its full of Walters. I'm talking big fish, pristine water, Canada's finest resources: stocked since great-great grandpappy's day by hardy men who backpacked fingerlings in to provide for future generations.

The foreigner spends a good number of years and dollars improving his property: an investment in the future, you might say. The road he builds up to the lake is gated from the time of purchase, but left unlocked as contractors come and go. Tresspassing continues in the owner's absences. After the contractors leave, the gate is securely locked. The owner, has done nothing to confront trespassing: indeed, locals always leave his property as they found it, minus a fish or two. Now worth a small fortune, the foreign owner's vision is perfectly fulfilled: generated electricity, water system, fancy heated water line, solar generated back-up, septic system, all those trees and the finest fishing, too!

Another form of access to this jewel of a lake has never been an option. Due to heavy terrain and cliffs, only a couple of hardy souls have managed to scale the cliffside using special gear. It's just not something your ordinary man is willing or able to undertake: daunting task. 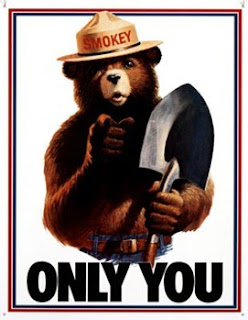 Nothing happens until the owner arrives one sunny day to find a group of locals in their boats fishing on the lake. Then, all hell breaks loose. The local constabulatory are called in: the trespassers are warned not to return.

Within a few months of the completion of this magnificent wilderness domicile, the place burns to the ground at the owner's next absence.

The foreigner is paid on his claim for damages. The locals resume their fishing, keeping their backs to the burned wreckage.

Who is to blame that this event got to the point of arson? Should the foreigner have been confronted regarding his intentions? Should the foreigner have spoken up in the beginning? Why do you think the two parties weren't talking to each other? Did separate agendas play a role in all this? Whose resources are we talking about? and to what degree can they be owned, shared or denied? Does the foreigner come out ahead on this situation? or do the locals fare best?

Fires are serious business. I was raised with Smokey: "Remember...only you can prevent forest fires!"

I'm off to my own special spot this evening, for a last cast in the fading light. Dorg is turning circles at my feet knowing the tackle box on the table can only mean one thing: we're going to the lake. Dorg is one smart dog.

I am enjoying another sunny morning here in N. Ontario: Dorg is keeping me company while Shelley and Kevin are off on holiday with his family, returning in time for my next appointment with the clinic vampires.

Speaking of vampires, the news is rich with those who suck the life's blood out of Canada. This week, Peter Mansbridge's CBC interview with CSIS', Richard Fadden, was particularly thought provoking, as was the news that the federal government's tough on crime policy means more jail cells will be needed.

After watching the news, I found myself thinking about a book someone gave me several years ago: Kevin Trudeau was the author. I remember how I laughed out loud as he prefaced his work by saying he was telling the truth despite threats to his life. If he lived it was only because they didn't dare touch him because he told the truth. If he wound up dead, it was further proof he was telling the truth. A win/win situation. This was a brilliant marketing move: he's right no matter what. Unfortunately, Kevin Trudeau's marketing technique, with a few adjustments, works just as well in politics.

In Canada, according to the CBC news report, 80% of security money is spent on terrorism, despite evidence the greater national threat is foreign influence through long term efforts to control key persons in government and the ongoing theft of billions in trade and technology secrets. If there is a terrorist incident, the millions spent to fight terrorism will appear to have been a good decision. If there is no terrorist incident, it's because the money was spent to prevent one. It's a "win/win" situation, that fails to address the real threats.

Prime Minister Harper has announced he plans to build more jail cells. The Ontario government is rightly balking at a Federal policy intending to dump the cost of those jail cells on the provinces. If Canadians are going to get tough on crime, we need more jails, this despite a projected cost for those jail cells capable of breaking the finanacial backs of Canadians. If crime rates soar, Harper is right. If they go down, Harper is still right. It's "win/win" policies such as these that fail Canadians.

With technology advances, many of those in jail cells for non-violent crimes, could be monitored safely with house arrest in the community. Criminalizing the poor creates a 'them versus us' mentality necessary to motivate the public's fear and continued financial support of a tough approach to a perceived threat. With reports claiming 15% of adult Canadians use cannabis, I cannot help but notice the criminal "them" is "us".

If Fadden is correct in saying Canada's biggest threat is the billions of dollars lost to the theft of technology and trade information, we have not only misplaced our funds, but our fear as well. The government is willing to spend millions on airport security and install X-ray equipment for passengers, while the real threat, according to the findings of the Air India bombing report, is loose security then and now, along with crime protection agencies unwilling to share information.

The Canadian taxpayer, duped into the fearful belief that crime and terrorism are rising threats, is asked to  dig into his pocket yet again and fork over more cash. As long as this government formulates policies using the "win/win" method, unwarranted rising taxes will continue to flourish. What is needed is social reform. Unfortunately, no one gets to rich with a scenario that promotes understanding instead of fear.

I'll post more on this subject after lunch and power nap. Would you believe that it is now pouring buckets of rain here? If we have rain, it's good for the garden. If we have no rain, it means I can spend time outside. Another "win/win" situation.

The little guy is me